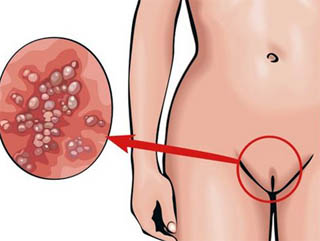 In a person whose immune system has been weakened, such as from undergoing chemotherapy, the herpes simplex virus can spread throughout the body via the blood stream and infect other organs and tissues. If a pregnant woman has an outbreak of genital herpes near the time of delivery, an obstetrician will recommended Cesarian section to avoid infecting the baby.

People who have genital herpes have an increased risk of becoming infected with HIV, the virus that causes AIDS, because genital herpes can cause sores and bleeding, which can increase the risk of HIV infection by providing a site for the virus to enter the bloodstream.

Because genital herpes often produces no symptoms, most people who have the disease do not know they are infected. In other cases, pain, tenderness and itching may develop near the vagina about two to six days after exposure to the virus. The person may also have a fever, a headache or feel generally ill. The first episode of genital herpes in women, called primary herpes, usually, occurs within two to three weeks of exposure to the virus. Some people experience severe symptoms in primary herpes, including sore, swollen lymph glands in the throat, armpits and groin, and flu like herpes symptoms including fever, chills, headache and fatigue.

Because the virus remains in the body after the blisters subside, about half of people who develop genital herpes have recurring outbreaks over the following months or years. Stress, sexual intercourse, surgery, menstruation, other infections, and skin irritations such as sunburn, or a rash may trigger outbreaks. The subsequent outbreaks are usually mild, last about a week, and often can be suppressed by taking daily doses of an antiviral medication. Some people have frequent outbreaks, while other have none. Out breaks usually last longer and are more painful in women than in men and in people who have a weakened immune system, such as those who are infected with HIV.

The major risk for women who have genital herpes is transmitting the virus to another person. Although genital herpes in women is most contagious when blisters or open sores are present, a person cans till spread the virus between outbreaks. The virus can infect the skin if the skin is cut, chafed or burned or if a rash or other sores are already present.

The diagnosis of genital herpes in women is based on the symptoms, a physical examination, and the results of laboratory tests performed on samples of fluid taken from the open sores. Because people who are infected with the herpes simplex virus an increased risk of contracting other STDs, doctors may also order tests for other STDs.